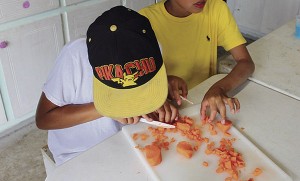 Kosher cookbook author Susie Fishbein is spearheading the creation of a culinary “boot camp” at NJY Camps, creating and teaching sessions and overseeing the construction of a $100,000 state-of-the art culinary building in Lakewood, Pa.

Kosher cookbook author Susie Fishbein is spearheading the creation of a culinary “boot camp” at NJY Camps, creating and teaching sessions and overseeing the construction of a $100,000 state-of-the art culinary building in Lakewood, Pa.

The Susie Fishbein and Friends Culinary Institute will be situated between Camps Nesher and Shoshanim, the Orthodox boys’ and girls’ camps, respectively, associated with NJY Camps. The “boot camp” is available only to campers enrolled at Nesher or Shoshanim.

The culinary institute is the latest response by a local camp to a push toward “specialty” programming, augmenting traditional summertime activities with specialized sports training, academic programs, and arts and cultural offerings.

Although NJY camps offer a variety of specialty camps in sports, the arts, and the sciences, the Orthodox campers could not access them.

Nesher director Jeff Braverman called the early requests for enrollment in the culinary camp “unlike any response we’ve ever had to anything in such a short period of time,” adding, “We’ve gone from 0 to 60 very quickly.”

Fishbein, who lives in Livingston, said she believes it’s the first true specialty camp for kosher cooking at a Jewish camp. NJY Camps executive director Len Robinson said he called other camps to find a template, including “the fanciest private camps,” but found that “although many were doing very cool things,” none were “at this level.”

Fishbein has committed to running the camp for at least two summers. She will teach some of the sessions and has invited other chefs to teach the others. Fishbein is the author of the “Kosher by Design” series of cookbooks, published by ArtScroll. Total sales of the series have exceeded 400,000 units, according to Fishbein’s website.

“This is the only kind of proposal that could have gotten my attention,” she said, referring to her ability to design the program to her standards.

The “boot camp” involves three intensive days in the kitchen, for a total of 18 hours, and will focus on basics and techniques, not recipes, said Fishbein. The sessions will be long enough “to really give kids the basics for how to think and behave like a chef. If they understand the proper way to roast a vegetable — although they will leave with a recipe for cauliflower popcorn — they will be able to roast 400 different kinds of vegetables. And if they understand how yeast behaves, that opens a whole genre of baking that so many people are fearful of.”

Campers will learn how to set and clean a station, how to anchor a cutting board, knife techniques, and the proper way to cut an onion. “This is not where you bang out food in 45 minutes,” she said.

When finished, the center will include stainless steel work stations, each with its own sink and burners, convection ovens, refrigerators, overhead mirrors for teaching, along with knives, food processors, and other tools.

She loves that this generation of kids is growing up watching “rock star chefs on TV,” and, as a result, they can imagine a culinary career at an early age.

She hopes her boot camp will help them along with their dream, but, she added, “It’s kind of neat, even if they don’t go on to cook for a living.”